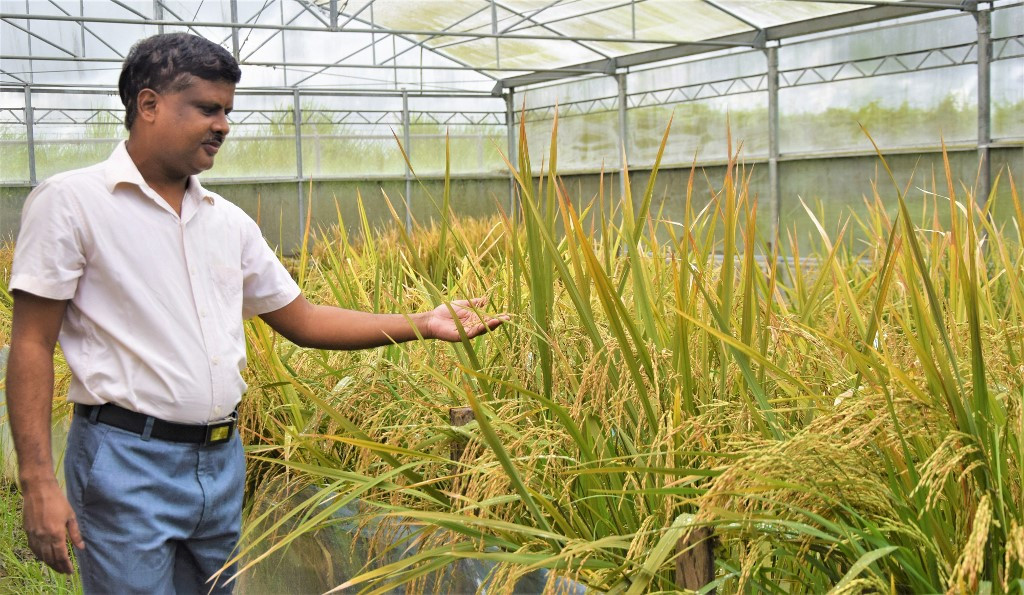 A year after regulatory approval, the Philippines has started transplanting Golden Rice this wet season, becoming the first country in the world to go for commercial cultivation of genetically-engineered rice rich with vitamin A.

Bangladesh is another country with Golden Rice technology applied to its rice varieties. But regulatory approval has remained pending for the last five years, hindering its cultivation in farmers’ fields.

Officials at the International Rice Research Institute (Irri) and PhilRice, the national rice research institute of the Philippines, said that farm-level cultivation of Golden Rice is taking place on 40 hectares in this wet cropping season.

The crops are now at the transplanting stage and are expected to be harvested in October.

Dr Russell Reinke, Irri Program Lead for Healthier Rice through Transgenic and Gene-edited Technologies, said the Philippines has a target of bringing a tenth of its rice acreage under Golden Rice cultivation by 2027.

Earlier, the regulatory authorities in the Philippines gave approval to Golden Rice, long touted as a partial remedy for childhood malnutrition, in July last year. The first variety of Golden Rice was registered with the National Seed Industry Council of the Philippines on April 7 this year.

The developments come at a time when scientists in Bangladesh have expressed deep frustration over regulators’ delay in approving the GMO rice variety in the country, pending since 2017.

Scientists’ tweaking and integration of a maize gene into rice helped develop Golden Rice that generates beta carotene, which converts into crucial micronutrient – vitamin A – as humans consume the cooked rice. It is genetically-engineered to provide up to 50% of the estimated average requirement for vitamin A in young children, the age group most susceptible to VAD (vitamin A deficiency).

According to the World Health Organization’s global vitamin A deficiency (VAD) database, one in every five pre-school children in Bangladesh is deficient in this key vitamin. Among pregnant women, 23.7% suffer from VAD. Globally, VAD affects an estimated 190 million children, a major cause of childhood blindness.

Dr Russell Reinke says one cup of rice for children, and two cups for adults a day will meet the nutritional goals, saving millions of lives as the poor cannot afford other high value food sources of vitamin A.

Irri is also working on developing rice rich with other important micronutrients i.e., iron and zinc. As Dr Russell Reinke says: “Future innovations (iron and zinc) depend on the success of Golden Rice.”

Regulators in Bangladesh remain jittery over approval decision for 5 years

Scientists in both Bangladesh and the Philippines advanced their respective Golden Rice varieties pretty much around the same time, but while regulators in the Philippines routinely processed and fast-tracked the variety approvals, their peers in Bangladesh have long been sitting on the approval process.
Scientists involved with Golden Rice development at the Bangladesh Rice Research Institute (BRRI) told Dhaka Tribune that since their submission of a petition seeking approval for it in 2017, there have been a few meetings by the country’s biosafety authorities.
“They asked for relevant data, trial results, etc., and we furnished them with all documents and proof and efficacy of the breed. But the regulators remained nonchalant after all these years,” said a BRRI scientist, who asked not to be named.
The regulators neither denied the importance of Golden Rice nor did they show any reason for such foot-dragging, according to the BRRI official.
Bangladesh was the first country in South Asia to release a GMO product – Bt brinjal – in 2014 with then agriculture minister Matia Chowdhury spearheading the move. In recent months, Chowdhury, in her capacity as head of the parliamentary committee on the agriculture ministry, has inquired several times to know what has been delaying the approval process of Golden Rice.
Md Shahjahan Kabir, Director General of Bangladesh Rice Research Institute (BRRI),, said: “The application for the biosafety approval of Golden Rice in Bangladesh has been pending with the Ministry of Environment. I strongly believe that the Bangladesh government will follow in the footsteps of the Philippines and clear the way for Golden Rice, which has been conceived as a sustainable, cost-effective solution for vitamin A deficiency in Bangladesh alongside other ongoing interventions.”

A brief history of Golden Rice

Although Bangladeshi scientists have been at the forefront of Golden Rice research since the development of this transgenic rice by Swiss and German scientists in 1999, the process gathered momentum only when then Irri Plant Biotechnologist Swapan K Datta infused the genes responsible for beta carotene into BRRI Dhan29 in 2002-03.
The genetic engineering technology to derive vitamin A in rice was first applied by Professor Ingo Potrykus of Swiss Federal Institute of Technology in Zurich, and Professor Peter Beyer of the University of Freiburg, Germany back in 1999. All renowned journals and news magazines, including Nature, Science and Time, covered the breakthrough in 2000.
The first-generation Golden Rice (known as GR1) was developed through infusing genes from daffodil, but later the second-generation variety (known as GR2) was developed by taking a gene from corn as it gave a much better expression of pro-vitamin A.
Some six lines of GR2 (scientifically called “events”) were developed and the Irri chose to work on one called GR2R, which it developed and subsequently infused in Filipino and Bangladeshi rice varieties.
After years of lab and greenhouse tests on GR2R, the Philippines and Bangladesh eventually halted the process upon advice from Irri that another line, called the GR2E, would work better.
Golden Rice co-inventor Professor Peter Beyer told this correspondent that there were some problems with the Event GR2R. He said the new event should work well. And it has.
Source: https://www.dhakatribune.com/bangladesh/2022/08/01/filipinos-start-golden-rice-cultivation