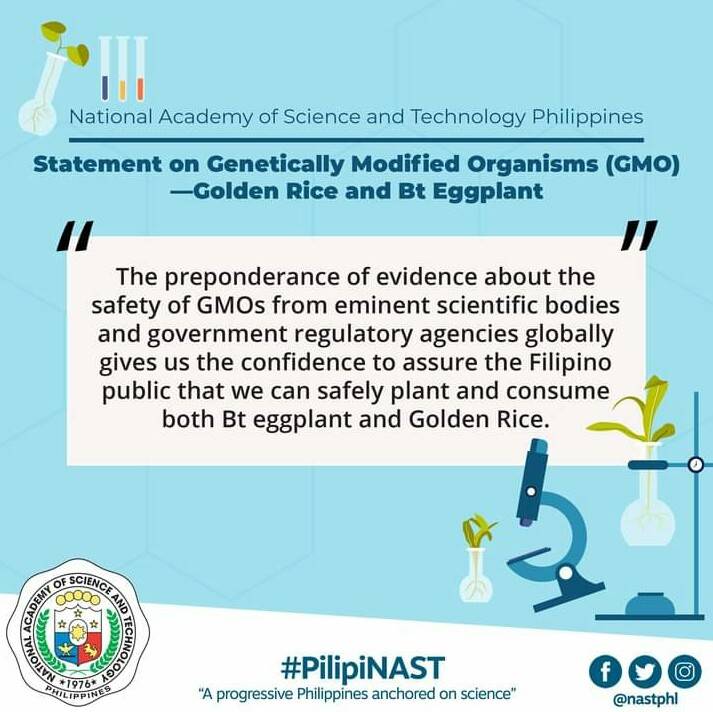 The National Academy of Science and Technology, Philippines (NAST PHL), the country’s premier recognition and advisory body on science and technology (S&T), vouched for the safety of genetically modified organisms (GMOs) such as BT eggplant and Golden Rice.

The NAST PHL issued the statement, anticipating “another wave of misinformation that causes confusion” against the new products of modern biotechnology.

“The preponderance of evidence about the safety of GMOs from eminent scientific bodies and government regulatory agencies globally gives us the confidence to assure the Filipino public that we can safely plant and consume both Bt eggplant and Golden Rice,” it said.

The advisory body said it has reviewed the evaluation of GMOs by other scientific bodies, including that of the National Academy of Sciences in the United States in 2016, the Science Advisory Council of the National Science Academies of the European Union (EU) member-states in 2013, 158 Nobel Prize Laureates as of 2021, the American Association for the Advancement of Science in 2013, the American Medical Association in 2012, the World Health Organization (WHO) in 2014, and the European Commission in 2010.

The NAST PHL described BT eggplant and Golden Rice as the first products of research and development work on GMO by the country’s public research institutes.
“These are just the latest of a total of 164 approved GMOs (143 for FFP and 21 for propagation), the first one of which was approved from commercial propagation in December 2002,” the advisory body said.
The Department of Agriculture (DA) approved Golden Rice for commercial propagation and Bt eggplant for utilization as food, feed and processing or FFP in July this year.