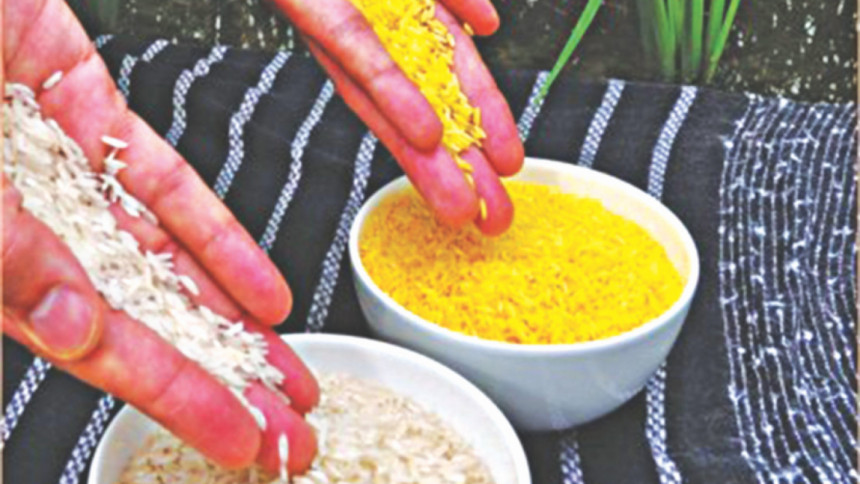 The Department of Agriculture in Philippines has approved the release of Vitamin A-enriched “Golden Rice”, clearing the way for it to be cultivated commercially in the country.

This has ramifications for Bangladesh as well. An application for biosafety approval of Golden Rice, filed by Bangladesh Rice Research Institute (BRRI) in late 2017, is currently being reviewed by the Ministry of Environment.

This new variety of rice received food safety approvals from regulators in Australia, New Zealand, Canada, and USA several years ago, but the Philippines is the first country to approve its commercial cultivation.

The approval came on Thursday after local authorities were convinced with the outcomes of years of research that Golden Rice is as safe as any other variety and it could be an effective tool to curb vitamin A deficiency in target demographics.

Congratulating PhilRice, Dr Md. Shahjahan Kabir, Director General of BRRI, said, “The approval for commercial propagation of Golden Rice in the Philippines is a major milestone in our fight against vitamin A deficiency not just in the Philippines, but in Bangladesh as well.

“The application for the biosafety approval of Golden Rice in Bangladesh has been pending with the Ministry of Environment. I strongly believe that the Bangladesh government will follow in the footsteps of the Philippines and clear the way for Golden Rice, which has been conceived as a sustainable, cost-effective solution for vitamin A deficiency in Bangladesh alongside other ongoing interventions,” the BRRI DG said.
Earlier, in December 2019, Golden Rice received approval for direct use as food, feed and processing from the Philippine government which enabled PhilRice, the national rice research institute in the Southeast Asian country, to conduct sensory evaluation research.

Before the sensory evaluation, PhilRice conducted years of rigorous lab research and field trials at research stations to ensure highest compliance with environmental and health standards.

As a genetically modified crop, Golden Rice needed environmental and health safety clearance before it could be tried in the open fields and finally approved for commercial propagation.

In the Philippines, around one in five children from the poorest communities suffer from vitamin A deficiency, which affects an estimated 190 million children worldwide.

The condition is the most common cause of childhood blindness, as well as a contributing factor to a weakened immune system.

Golden Rice is genetically engineered to provide up to 50 percent of the estimated average requirement of vitamin A for young children, the age group most susceptible to Vitamin A deficiency (VAD) in the Philippines.

PhilRice has been working with local partners to identify market and programme-based approaches for bringing Golden Rice first to selected communities with a high prevalence of VAD and other associated micronutrient deficiencies.

It is also increasing the volume of available seed and other remaining activities necessary for moving Golden Rice into farmers’ fields.

Golden Rice has been developed under the Healthier Rice Program in the Philippines and Bangladesh. It is the first rice developed to address vitamin A deficiency, and under the Healthier Rice Program, rice researchers at PhilRice and BRRI are also developing biofortified varieties with enhanced zinc and iron content, with technical and resource support from the International Rice Research Institute (IRRI).