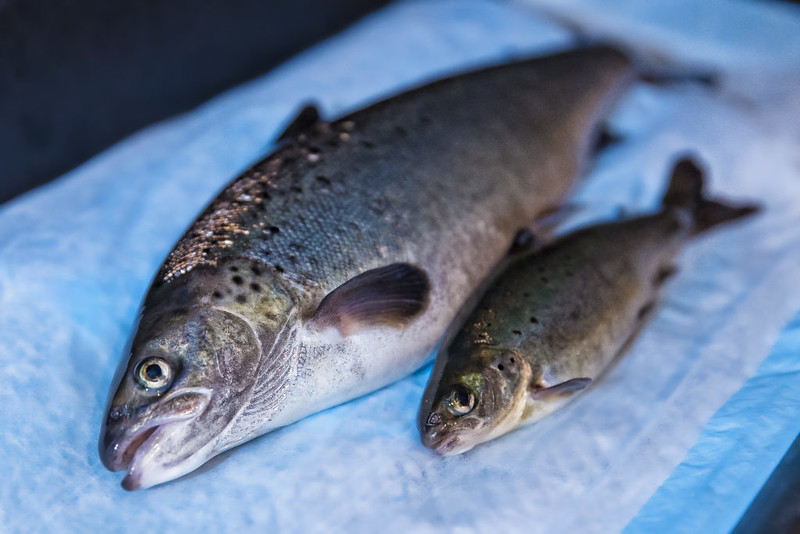 A GM salmon and a non-GM salmon that are of same age. (Photo credit: AquaBounty)

By the year 2050, the United Nations (UN) and independent research institutions project that our current world population would reach around 9.8 billion. An almost two-billion increase from the current population would need to be met by a sufficient food source to ensure food security. Even before 2050, we have already pledged to bring down the staggering estimated 690 million people out of hunger by 2030 as part of the UN Sustainable Development Goals.

But according to the UN, we are not even on track in achieving this goal, indicating that if current trends continue, the number of hungry people could go well beyond 840 million by 2030. Aside from the crafting of better regulatory policies in the distribution of food, the production side must be given greater attention, as existing technologies are available that can help solve the food problem.

In a report by the Food and Agriculture Organization of the United Nation way back in 2014, ten percent of the world population is dependent on fisheries for their livelihood and 4.3 billion are reliant on fish for 15 percent of their animal protein intake. With the issue of warmer oceans affecting fish production as well as increasing demand for food supply, sustainable solutions through genetically modified (GM) fish are viable options in helping achieve food security.

GM salmon, for example, was developed by introducing growth-inducing genes from the Chinook salmon and ocean pout into the genetic make-up of an Atlantic Salmon. This has resulted in a GM fish that grows twice as fast as its conventional counterpart while consuming 25 percent less feed to produce the same fish biomass.

Scientists at the University of Rhode Island have also developed rainbow trout which grows larger by inhibiting its muscle growth-restricting protein. This has also led to more efficient use of feed, with fish consuming up to less than 20 percent feed to produce the 1-kg of fish compared to their more conventional counterparts.

Genetic engineering does not necessarily have to deal with the introduction of other genetic material, as sometimes the base make-up of the organism could prove sufficient. For example, through this genetic editing method, a GM company has also developed tilapia to produce a 70-percent improvement in fillet yield, a 16-percent increase in growth rate, and a 14-percent efficiency of transforming feed given into biomass.

Disease reduction among fish could also be accomplished through genetic editing. Such is the case with the research of scientists at the Norwegian Institute Nofima studying what part of the genetic material of Atlantic Salmon produces conditions attractive to sea lice, which is responsible for around $550 M or P27.5 B worth of damage to the Norwegian salmon industry. Desirable traits for fish could also be developed to enable them to be grown in response to rising water temperatures.

Policies directed towards curbing overfishing and towards more sustainable fishing practices would help in stabilizing the world’s food supply and in protecting the environment. We must, however, maximize all the tools and options that we have. If anything is to be learned from the use and development of genetic engineering to meet our food demands, it is that this novel technology can help in meeting our goals towards sustainability and food security.

**Biotechnology Coalition of the Philippines**