A South African scientist says it’s about time African governments prioritized the interests of farmers and allow them to use genetically modified (GM) crops for the benefit of the continent.

“Let the farmers decide,” said Jennifer Thomson, emeritus professor in the Department of Microbiology at the University of Cape Town. “It shouldn’t be up to the politicians to say yes or no. Give it to the farmers.”

Thomson, who made her comments during an AfS live webinar session that reviewed her latest book, “GM Crops and the Global Divide,” urged governments to reconsider their stance on GM technology and stop blocking farmers from accessing it.

“Farmers are savvy,” she said. “If it doesn’t work, they won’t plant it. Let the farmers choose. It’s such a powerful technology and it can save people and save livelihoods.”

Currently, only farmers in South Sudan, Kenya, Nigeria, Eswatini and South Africa are growing GM crops out of the 54 countries on the continent. Thomson blames anti–GMO activists for the slow pick up, even though those growing the crops have realized higher yields and reduced pesticide use and input costs.

“It’s the fault of the activists,” she observed. “They have made the regulations so unwieldy and so expensive that it’s only the multinationals who can afford [to take these crops from concept to commercialization]. It’s just too expensive to put it through the glass house trials and green house trials and field trials…. it’s not the fault of the multinationals but the anti-GM activists who have made the regulations so unwieldy.”

Thomson is urging African governments to take an interest in agricultural biotechnology and make more investments in developing crops for smallholder use on the continent. She encouraged them not to follow in the footsteps of European governments, which can afford to limit options because their citizens already enjoy food security.

“It started off as a trade war… they didn’t want American GM crops to flood the market in Europe because they could produce enough,” she explained. “Then they said, you can buy it [GM crops], but you can’t grow it. There is absolutely no logic [in that]. I can understand why the European communities are so anti-GM. Their farms are massively productive fields with all sorts of fertilizers and growth activators… But in Africa, the soil is so old that we’ve got no nutrients in the soil.”

Thomson criticized groups that encourage farmers to continue applying archaic methods to farming, insisting all farmers want to expand and become larger scale producers — not remain small-scale subsistence farmers. “So, to think that small is cute, it may be cute in France, but it’s not cool in Africa… cute isn’t what we need in Africa,” she said.

Thomson’s new book, “GM Crops and the Global Divide,” discusses the history of GM technology in both the medical and agricultural space. It also explores why GM technology is not as popular in Europe as it is in America, details some of the economic and environmental benefits of GM crops and examines the role that the developed world is playing in thwarting efforts to introduce GM crops in Africa. 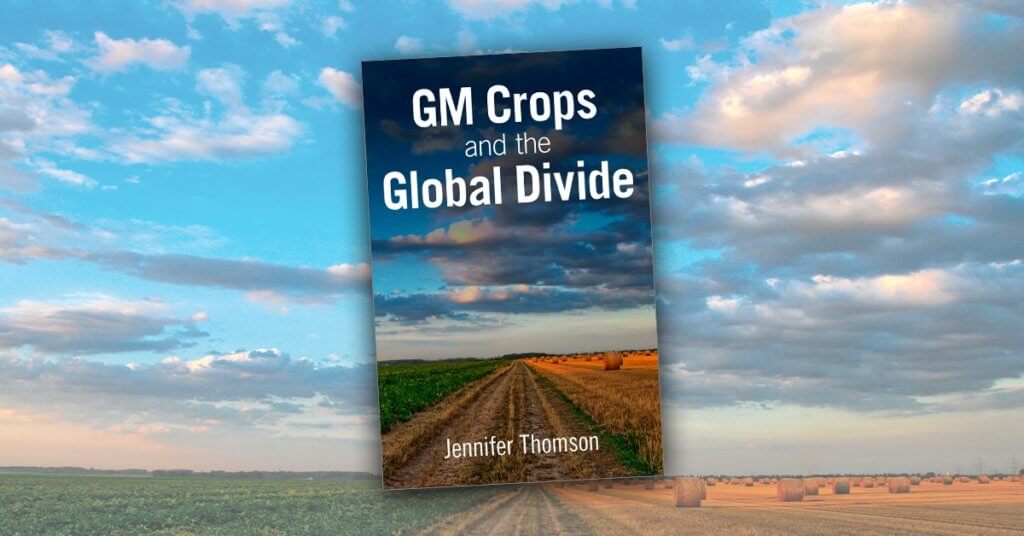 The bottom line of her book is this: If many organizations in “developed countries” express anti-GM sentiment, many countries in the “developing world” will take note, Thomson wrote. “Perhaps one way to sum up the effects that the West is having on the Rest is that the wealthier ‘haves’ who do not need to ‘have it’ [GM crops] because they have enough food already, are preventing the ‘have nots’ who need it, from having it and improving their food security. For the West to prevent such farmers from even testing whether the improved seed will bring improvements into their lives, and the lives of consumers, is morally concerning,” she wrote.

She criticized claims by some activists that GM crops should not be allowed in Africa because they are “unnatural.”

The microbiologist also criticized the organic food movement for blacklisting GM crops, asking, “What’s more organic than a piece of DNA? I still can’t understand why the organic farming movement is not leaping onto this… It will solve a lot of their problems…” she added.

Thomson said that Africa needs “leaders who will innovate and encourage their people to innovate” if the continent is to take advantage of GM technology to further its development. She wants governments to ensure over-regulation does not hamper innovation.

“It (GMO technology) does need a regulatory system,” she said. “I’m not against regulations, but I’m against excessive regulation… The regulations must be sensible… They must be operated on a case-by-case basis… the decision has to be science based… Regulation shouldn’t constitute barriers. They should ensure safety.”