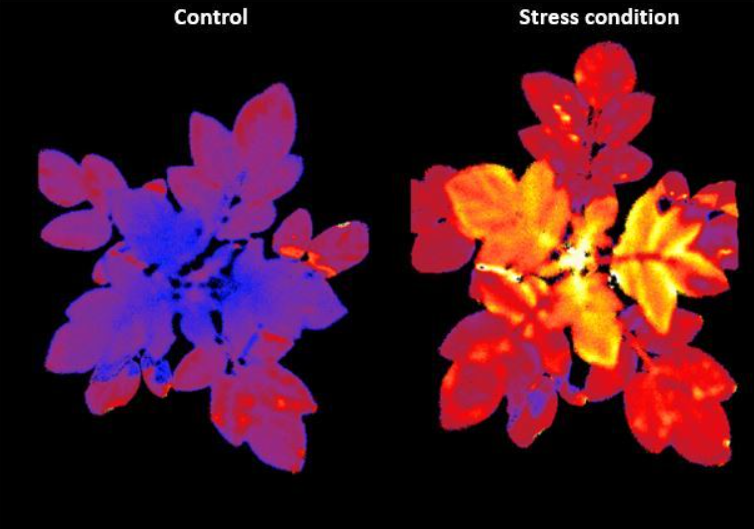 One of the challenges of farming lies in the fact that by the time plants appear to be diseased or otherwise stressed, it may already be too late to address the problem. A new type of potato, however, is designed to warn farmers by fluorescing at the earliest stages of stress.

The experimental genetically engineered potato plant was developed by scientists at the Hebrew University of Jerusalem, led by Dr. Shilo Rosenwaser. They chose to modify the Solanum tuberosum potato better known as the Irish potato as it’s a major food crop throughout much of the world.

The researchers introduced a new gene into the plant’s chloroplasts, which are organelles (subcellular structures) that conduct photosynthesis. That gene expresses a fluorescent protein in response to the presence of reactive oxygen species – these are highly reactive chemical molecules that are produced in order to help mitigate stress, although they can also harm the plant if they build up in its cells.

Putting it simply, the more stress that a plant experiences, the greater the amount of reactive oxygen species it produces. In the case of the new potato, this in turn causes it to produce more of the fluorescent protein – so the more stressed the plant is, the brighter its fluorescent glow. And although the fluorescence can’t be seen by the naked eye, the scientists could detect it using a highly sensitive fluorescent camera.

“We were able to monitor the fluorescence signals emitted from the biosensors and noticed the accumulation of reactive oxygen species during the early phase responses to stress conditions such as drought, extreme temperature, and high light,” says Rosenwaser.

The team now plans on developing the concept further, and applying it to other crops. In fact, a similar but unrelated technology has already been commercialized by California-based company InnerPlant, which is set to commercially release a tomato plant that fluoresces when stressed.

A paper on the potato research was recently published in the journal Plant Physiology.