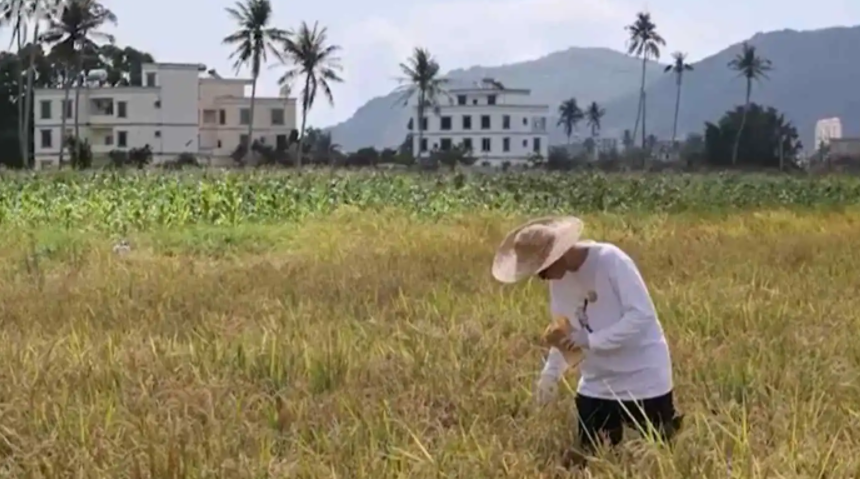 GUANGZHOU — Once wary of genetically modified crops, the Chinese government has pivoted toward backing companies active in the sector to ensure food security at home and expand influence abroad.

Long known as a resort destination, the southern island of Hainan also serves a key role in the agricultural field. Crops that are cultivated in China’s northern or central regions during the summer are first test-grown in the island from autumn through spring, thanks to its tropical climate.

At a rice paddy there, researchers from a state-run research facility select ears of rice to seal in envelopes. “We’ll take them back to Shanghai,” said one researcher. “It’s for a study to improve resistance against diseases.”

Hainan’s trial cultivations first began in the 1950s, and the fields now cover 180 square kilometers. China calls the stretch of land the “agricultural Silicon Valley” due to the contributions it has made to crop development.

China has long developed higher-yielding varieties of rice and corn through crossbreeding. Nowadays, genetically modified organisms have become increasingly prevalent. Where crossbreeding can require multiple generations of planting to produce desired characteristics, that goal can be accomplished in a fraction of the time through GMO technology.

A poster child for that advancement is Yuan Longping High-tech Agriculture, named after China’s celebrated researcher of hybrid rice who passed away over the weekend. He had served as honorary chairman of the company before his death.

Founded in 1999, the company also runs a research site in Hainan. It developed the Ruifeng 125 variety of GMO corn that is tough against weed killers and the fall army worm. In April, Ruifeng 125 received a safety certification to plant in China’s northwest region.

Safety certifications indicate that a GMO crop poses no harmful effect to the natural environment or on the human body while ensuring nutritional value. The approval opens the door for the company to put together equipment and staff to produce and sell the seeds to farmers.

The production team and infrastructure are subject to final screening by state inspectors. Ruifeng 125 is expected to become commercialized as a livestock feed as early as next year.

Up to now, only a limited number of GMO plant varieties, such as cotton, have received approval from Chinese authorities. One factor impeding progress is that the domestic seed industry is still in the early stage of development.

State organs hold the central role in producing and selling seeds. It was only in 2000 that businesses were allowed to take part in the sector. Consequently, only a few companies such as Yuan Longping High-tech Agriculture and Beijing Dabeinong Technology are capable of developing GMO seeds.

Another obstacle was the strong resistance from consumers against GMO products. Since the 2000s, foreign non-governmental organizations and media outlets worldwide have voiced concern that GMO plants are being produced and distributed in China in secret.

Amid the ensuing controversy, the Chinese government was forced to become circumspect in issuing approvals for GMO development.

The state began loosening restrictions amid growing concerns about food security. China is a net importer of seeds, and the country purchases wheat and vegetable seeds from the U.S., Japan, Denmark and elsewhere. Last year, China imported 2.9 billion yuan ($450 million) worth of crop seeds, or three times the export.

To produce the Chinese staple foods of pork and poultry, a large amount of feed is essential. Without improving development capabilities, the country would need to rely on importing seeds and feed grain, leaving it exposed to the fallout from climate change or a newly emergent blight.

There is also the need to create a buffer against trade wars. Higher tariffs on crops are a weapon of choice in trade disputes, but those measures risk raising food prices. If trade tensions lead to restricted farm product procurement, it would impact China’s livestock breeders.

Plans to beef up the seed business are being connected to China’s cross-border Belt and Road infrastructure initiative. In February of last year, the Ministry of Agriculture and Rural Affairs put forward a plan to upgrade the national seed industry and encourage relevant enterprises to actively do business offshore.

One major issue, however, is the decline of the profit margin in China’s seed industry for the past few years, according to data compiled in part by the agriculture ministry. Contributing to this trend are small and midsized players that slightly modify existing seed varieties and sell them as their own.

The Chinese government is expending resources on protecting intellectual property. If an improved regulatory environment leads to wider margins, research and development capacity could expand at major seed makers, which may pave the way to a clash with Western industry peers.