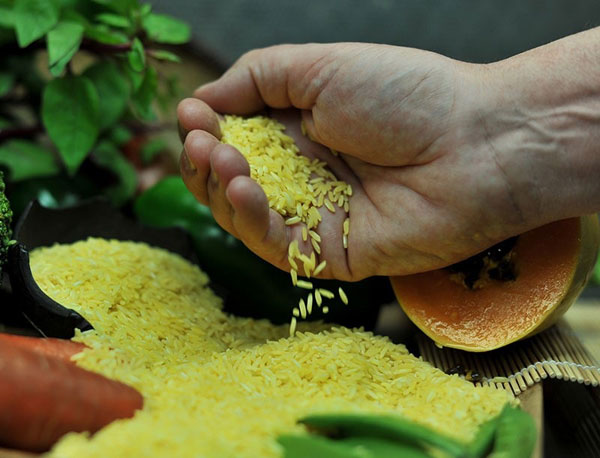 Commercialization. Once the Golden Rice gets the permit for commercial propagation, the Department of Agriculture will prepare its deployment on a pilot scale in areas where Vitamin A deficiency is high.

A gene-modified rice will soon be available in local markets.

Called the Golden Rice, its genes have been altered to add genes from corn and a common soil microorganism to enable the plant to produce beta-carotene in the rice grain.

Once it gets the permit for commercial propagation anytime soon, the Department of Agriculture will be preparing for its deployment initially on a pilot scale in areas where malnutrition, especially vitamin A deficiency is high, it said.

Beta-carotene, which would otherwise be available only in the leaves and stems of ordinary rice plants, is a source of vitamin A required for mothers or lactating women and for the development of young children.

Scientists at the International Rice Research Institute have shared the Golden Rice technology with colleagues at PhilRice who, in turn, adapted Golden Rice to grow in local conditions while maintaining all other characteristics of ordinary rice.

Rice has a simple and easily digestible food matrix, which allows for a high bioavailability and bioconversion of beta-carotene into vitamin A.

Bioavailability is the total amount of the nutrients available in the rice grain, in this case, beta-carotene and other useful carotenoids. The nutrients should be digested, stored and converted by the human body into beta-carotene.

Measurements show there is sufficient beta-carotene in Golden Rice to meet the 30 percent to 50 percent estimated average requirement of vitamin A for young children and mothers or lactating women. “The efficient bioconversion rate of Golden Rice is promising from a dietary perspective, given rising food costs and the persistent inadequacy of Filipino diets in terms of providing macro- and micronutrients,” PhilRice said in a statement.

Rice continues to be a top source of energy across all Filipino households regardless of socio-economic status, according to the 2018 Expanded National Nutrition Survey of the Department of Science and Technology’s Food and Nutrition Institute (FNRI).

While consumption of animal-based food increases with income, consumption of fruits and vegetables is consistently low across all households, the FNRI survey shows.

While the survey shows a slight decline in Vitamin A deficiency among young children, it continues to be a severe problem among children aged 12-23 months, as well as in children belonging to the poorest households.

Vitamin A intake in the Filipino diet is inadequate and prevalence of the recommended twice-yearly Vitamin A supplementation even among children without vitamin A deficiency is low, according to FNRI data.

Young children are disproportionately affected by the deficiency because proper nutrition during the first 1,000 days of life directly affects physical and cognitive development.

The prevalence of undernutrition, stunting, wasting and anemia is higher among vitamin A deficient children. When left untreated, the condition will have lasting effects on future productivity and quality of life.

It underscores the need for a consistent supply of Vitamin A-rich food sources.

A simulated analysis conducted at PhilRice shows that even substituting small amounts of ordinary rice with Golden Rice can improve vitamin A intake among target populations.