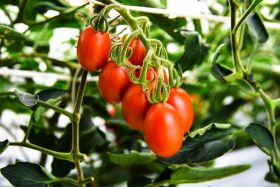 Sanatech Seed, the Japanese start-up behind the launch of the world’s first direct consumption genome-edited tomato, says the variety is the first of several it plans to develop with enhanced nutritional benefits.

According to Shimpei Takeshita, president of Sanatech Seed and chief innovation officer of Pioneer EcoScience, the exclusive distributor of the tomato, it contains four to five times more GABA than a regular tomato.

“This tomato represents an easy and realistic way in which consumers can improve their daily diet,” he told delegates during a session on how to breed better tomatoes at this year’s Global Tomato Congress.

Takeshita said the reason for choosing both the Sicilian Rouge variety and the GABA trait was their high level of acceptance by consumers.

“Sicilian Rouge is a popular tomato, and consumers are already used to buying other products with a high GABA content so we felt it was important to introduce them to the technology in a way that was already familiar to them,” he explained.

Dr Hiroshi Ezura, CTO of Sanatech Seed, told the congress that CRISPR/Cas9 is simpler and easier to handle than other gene editing techniques, making it ideal for developing crops with enhanced nutritional characteristics.

Rules in Japan allow products developed using gene editing to be sold providing the necessary approval has been sought from the regulatory agencies.

“With GMOs you need to produce a lot of data in order to get regulatory approval by the government, while with gene editing, you still need to notify the government but the amount of data you have to produce is a lot lower,” Ezura explained.

There have been widespread marketing campaigns in Japan to educate consumers about the difference between GMOs and gene-edited crops, so there is a higher level of understanding and acceptance of these products than in other parts of the world.

“The seedlings will be distributed free of charge to home gardeners and if people like the product they will hopefully share their experience and help spread the word,” Takeshita said.

“We opened up a campaign via our website inviting people to join and so far we’ve had 5,000 applicants, each of whom will be given five seedlings to plant. We’re in no rush to introduce the tomato commercially, the important thing is to win over the consumer.”

Ezura said the next step would be to introduce the high GABA trait to other tomato varieties, as well as to engineer other traits that will help growers and marketers.

Sanatech Seed has access to a total of 25 commercial tomato hybrids under its agreement with Pioneer EcoScience.

Takeshita said the company was keen to pursue new opportunities worldwide. “We are keeping a close eye on the regulatory status of gene-edited crops in other countries, particularly in the UK, which will be an important test case, as the government has more options on how to proceed with its regulatory framework since leaving the European Union,” he noted.