Why the flavor and fragrance industry is embracing biotechnology 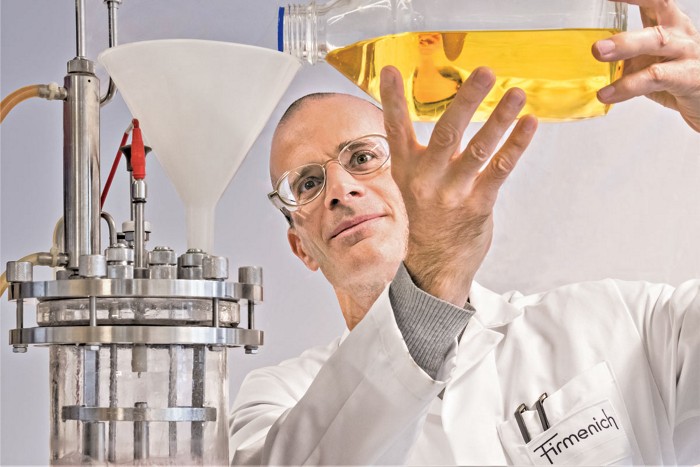 Winter is grapefruit-harvesting time in Florida. Juice from the fragrant yellow globes is a welcome bit of sunshine for shoppers in chillier latitudes. And unbeknownst to most consumers, oils and extracts from grapefruit peels supply the food and beverage industry with popular aroma chemicals such as nootkatone.

In recent years, however, producers of grapefruit-flavored foods and drinks have been caught in a squeeze. Figures from the US Department of Agriculture tell the tale: In the winter of 1996–97, Florida farmers harvested 59 million boxes of grapefruit. This season, the forecast is for a mere 4.6 million boxes.

Worldwide, the production of grapefruit and other citrus is in peril because of the spread of citrus greening, as well as temperature shifts and extreme weather caused by climate change. Meanwhile, demand for natural citrus flavoring has gone through the roof.

“When ingredients come out of by-products of something else, there is always the danger that supply and demand are really out of whack,” says Marifaith Hackett, director of specialty chemicals for the consulting firm IHS Markit. “If you are a purchasing manager, you’re likely thinking, ‘We just have to come up with something better.’ ”

In the flavor and fragrance industry, that something better may be a manufacturing platform based on fermentation using modified microbes.

Top flavor and fragrance companies have been quietly partnering with biotechnology firms for as long as 2 decades. Recently, their interest has become more public, thanks to acquisitions and in-house investments by firms such as BASF, Firmenich, Givaudan, and Takasago International. And biotech entrants, including Conagen and Manus Bio, are at work expanding the list of available molecules.

All these firms are betting that brand owners will want to sidestep wobbles in their supply chains caused by poor weather, seasonality, and inconsistent harvest quality without having to turn to synthetic substitutes. They will also be attracted to ingredients that help them avoid human-caused problems like political unrest, trade disputes, unsustainable harvesting, and mistreatment of small-holder farmers.

Because of prevailing secrecy in the flavor and fragrance industry, it is not known how well biotech ingredients are selling—or in some cases, what those ingredients even are. But they are definitely gaining a toehold where there are shortages of natural products. And since many can be listed as natural in the US and Europe, they are helping spruce up ingredient labels to appeal to shoppers who avoid synthetic additives.

Producers of fermentation-derived ingredients don’t need to steal existing market share to do well. All they need is a slice of the industry’s growth. According to IHS, global sales of flavors and fragrances top $40 billion annually and are growing by 3.5%, or $1.4 billion, per year.

Established firms are positioning themselves to claim that growth by bulking up their fermentation offerings and expertise. For example, BASF added nootkatone and nine other fermentation-derived molecules to its portfolio of synthetic aroma chemicals by acquiring the Dutch biotech firm Isobionics in 2019. At the same time, BASF struck a deal with another biotech, Conagen, for fermentation-derived natural vanillin.

In its announcement, BASF said biotechnology is its answer to meeting rising demand for natural ingredients while avoiding the pitfalls of sourcing plant-based substances.

Firmenich, one of the world’s oldest flavor and fragrance houses, saw the promise of biotech early on, says Sarah Reisinger, the company’s senior vice president for research operations. Twenty years ago, “the technology existed, but it was too expensive. Consumers and clients didn’t want to pay more,” she says. “As the abilities got better, it became more feasible for the industry we’re in.”

Reisinger points to two reasons Firmenich stuck with it. “One is that biology is amazing. For example, if you want a specific oxygenation, a P450 enzyme is incredibly efficient.” Another benefit is the ability to use plant-based carbon and sustainable processes to make products that are difficult to source from nature.

One of the earliest fermentation partnerships in the fragrance industry was Firmenich’s linkup with industrial biotech pioneer Amyris. In 2014, Firmenich launched a patchouli-scented product called Clearwood, which it calls the world’s first biotech perfumery ingredient. More recently, it introduced Dreamwood, its answer to the unsustainable supply of santalol, traditionally obtained from endangered sandalwood trees.

Reisinger, a veteran of Amyris and microbial engineering firm Ginkgo Bioworks, is heading up Firmenich’s new pilot plant for biotech and natural ingredient development in Switzerland. Opened in September 2020, the plant is equipped for R&D but also features small-scale production gear including fermentation vessels, centrifuges, and carbon dioxide extraction systems. They help researchers validate that the fermentation process can meet the company’s purity and cost requirements.

The facility also produces ingredients for product testing. “We are close to the users—the creationists and perfumers who make the products,” Reisinger says. “In synthetic biology we talk about the innovation cycle: design, build, test, learn. Being all in the same community really helps you.”

Firmenich’s chemists can use fermentation-derived molecules as starting points to get exactly what they want. For example, the company combined biotechnology and green chemistry to create a version of its already-popular ingredient Z11, this one made with plant-based carbon. The company describes its fragrance as dry, woody, and ambery, calling to mind “a precious wood rimmed in shining metal.”

Established flavor and fragrance firms are pursuing new relationships with start-ups even as they build their own capabilities. Partnerships can give them access to the full diversity of natural product know-how and to process technology customized for fermentation ingredients.

One start-up, Conagen, works on both ends of that spectrum. It was cofounded in 2010 by Oliver Yu, a biochemist who spent more than a decade at the Donald Danforth Plant Science Center.

“Our roots are literally in plant biochemistry,” says J. Casey Lippmeier, the company’s vice president for innovation. “One of the things we really like to do is discover biochemical pathways that no one else has identified.” Those pathways can provide genes and enzymes that make interesting, desirable molecules that haven’t yet been commercialized, he explains.

But to make an economically viable product, microbial engineers need to construct efficient metabolic pathways made of multiple genes that function in a cascade. And for an ingredient to be fit for commercialization, Lippmeier says, the organism has to make the molecule at a much higher concentration than what is found naturally in a plant.

Once the basic know-how and process for producing a type of molecule via a microbe or enzyme are in place, Lippmeier says, it is easy to make other, similar structures.

Lippmeier says his favorite aroma compound is γ-decalactone. The molecule smells strongly of peaches, but it exists in exceedingly trace quantities in the fruit itself. And the same basic lactone process can make more than 20 other fruity and buttery molecules.

“In addition to being in many cases more sustainable, we just get a better-tasting molecule using biology” instead of synthesis, Lippmeier says. That’s because synthetic versions are often racemic mixtures, which can bring an off flavor.

While some biotech firms specialize only in engineered microbes, Conagen works on the full manufacturing process, including separation and purification. “That’s part of the magic,” Lippmeier says. Depending on the molecule, that can mean distillation, crystallization, selective solubility, or solid-phase separation.

Besides its partnerships with big firms like BASF, Conagen brings its own ingredients to market with Blue California, an affiliated company that supplies natural food and cosmetics ingredients.

The trendy beverages contain carbonated water, some ethanol, and little else. In such a stripped-down recipe, the normal flavor tricks—such as adjusting acidity or sweetness to trigger the perception of different fruit flavors—don’t work, Oglesby says. “Hard seltzers cry out for molecular precision. You can’t put anything in there that you don’t absolutely need.”

This year, Blue California’s portfolio will grow to include fragrances for consumer products like laundry detergents and fine fragrances. Among them will be Conagen’s new macrocyclic musk lactones, made via fermentation of plant lipids. They will give formulators of consumer goods natural options for musk instead of the common synthetic ketones.

Last year, Givaudan acquired the French biotech specialist Alderys and announced a research partnership with the enzyme maker Novozymes for “sustainable solutions in the areas of food and cleaning.” Givaudan is also working with the start-up Manus Bio, an expert in terpenes, on an unnamed flavor and fragrance molecule.

Ajikumar Parayil, Manus Bio’s CEO, says the number of biotech flavor and fragrance molecules moving into manufacturing is growing. “The moment we hit the ground on the cost of fermentation, you will see exponential growth,” Parayil says.

Manus is based on technology from the lab of Massachusetts Institute of Technology chemical engineering professor Gregory Stephanopoulos, where Parayil was a postdoc. In November, the company raised $75 million from investors to increase capacity at its manufacturing facility in Augusta, Georgia.

At Illinois-based Bell Flavors & Fragrances, customers have been calling about natural vanillin and other fermented ingredients, says David Banks, the company’s marketing director and trends forecaster. “Every customer wants a clean-label product, and they want to use flavors to reduce fat or sodium and still have the same taste—and they want it all to be cheaper,” Banks says.

Bell’s experts help customers make consistent products, which can be hard to do if ingredients are affected by citrus greening or come from at-risk crops like banana, cacao, and vanilla. “Consumers expect it to taste the same every single time,” Banks says.

He stresses that providing customers with sustainability credentials for food and fragrance ingredients is now a requirement. “Outside companies are monitoring and watchdogging our ability to provide sustainable products, and they give us a score for it,” he says.