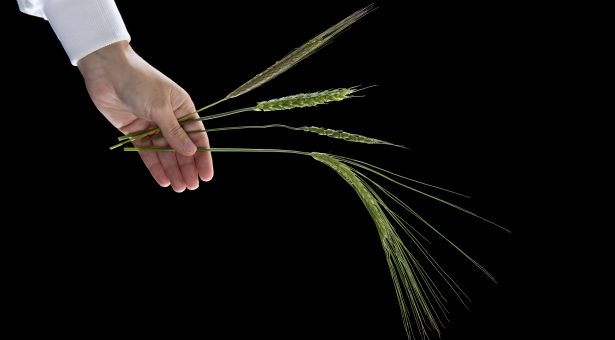 John Innes Centre researchers have helped in the development of pioneering gene stacking techniques to combat the growing threat of wheat rust.

Researchers at CSIRO, Australia’s national science agency, led the international effort to develop wheats with a stronger and potentially more durable level of resistance against rust diseases by “stacking” resistance genes together.

This represents a major advance over conventional wheat breeding protocols where individual resistance genes are added one by one.

The researchers developed novel genetic technologies that combine and insert five different wheat resistance genes. The bundling prevents separation in subsequent breeding generations of the plant, according to results published in Nature Biotechnology.

Lead CSIRO researcher Dr Mick Ayliffe said: “Our approach is like putting five locks on a door – you’re making it difficult to get in. Rigorous field testing showed that our gene stack approach provided complete protection against the rust pathogens we were targeting.”

As rust is a global problem, it requires international collaboration with the team comprising researchers from CSIRO, University of Minnesota, Aarhus University, The John Innes Centre, USDA, Xinjiang University, and funding by the 2Blades Foundation.

Dr Brande Wulff from the John Innes Centre, one of the researchers developing this technology said:

“It’s rewarding to see two of the genes that we helped clone have been used in this first stack in wheat. It is exciting because it demonstrates that the technology works; if there were to be a new epidemic of stem rust we would now have a potential solution. For those who are against the deployment of GM crops it becomes more difficult to oppose this when you have such an elegant solution that uses genes from wheat in a novel way to protect wheat.”

Future gene stacks are being developed for wheat using genome-editing tools to produce resistant crops that may be considered non-GM (genetically modified) in some countries, such as the USA.

Wheat stem rust is an historic disease in the UK and absent here for 60 years but, due to changing climate and a lack of resistance in modern wheat varieties it represents, an emerging threat.

Wheat rust can rapidly mutate, making it difficult for wheat breeders to respond quickly using conventional breeding. However, multiple genes compiled together in a gene stack can strengthen wheat’s defences and be deployed far more quickly.

Dr Ayliffe said this study had targeted stem rust, but the same technology can be used to breed against stripe and leaf rust diseases as well, and in different existing wheat varieties to add resistance.

He added: “We don’t know the limits of this new gene stacking technology yet. We currently have an even larger genetic stack with eight resistance genes, so even more protection against rust is possible.”

A suite of enabling technologies developed over the last five years removed some of the challenges associated with discovery and cloning of disease resistance genes in wheat and its wild relatives.

Dr Brande Wulff’s group at the John Innes Centre have developed these technologies. They include:

Combining mutagenesis and resistance gene enrichment sequencing (RenSeq), this technology reduces the cost of sequencing whole wheat genomes by homing in on intracellular immune receptor-encoding genes, a gene-class which has been shown to encode disease resistance genes in 80% of hundreds of previously documented cases.

Another way to reduce the wheat genome complexity is to map the gene to one of its 21 chromosomes.

Thanks to improvements in chromosome flow sorting and purification, it is now possible to sequence single chromosomes from almost any wheat cultivar.

This technology uses nature’s own genetic structure, i.e. the recombinations and mutations which have accumulated in a wild population of wheat relatives over many thousands of years thus circumventing the need for generating your own genetic structures as in MutRenSeq or MutChromSeq.

The technology combines discovery and cloning all in one, drastically reducing the timelines and costs of cloning disease resistance genes. Once a panel has been sequence-configured and bulked up, it can be used again and again against different pathogens and pathogen isolates.

AgRenSeq led to the rapid cloning of Sr46 and identification of a candidate for SrTA1662 (Arora et al. 2019).

“With these technologies, some of the key obstacles and mystery associated with discovery and cloning of disease resistance genes in wheat and its wild relatives have been removed,” says Dr Wulff.

“Improved wheat genome assembly technologies and wheat transformation methods is likely to significantly lower further barriers over the next 2-4 years. This will provide the raw material for generating and testing multi-resistance transgene stacks, not just against stem rust, but against many other major disease of wheat, and other important crops.”