Engineering a way out of climate change: Genetically modified organisms could be the key 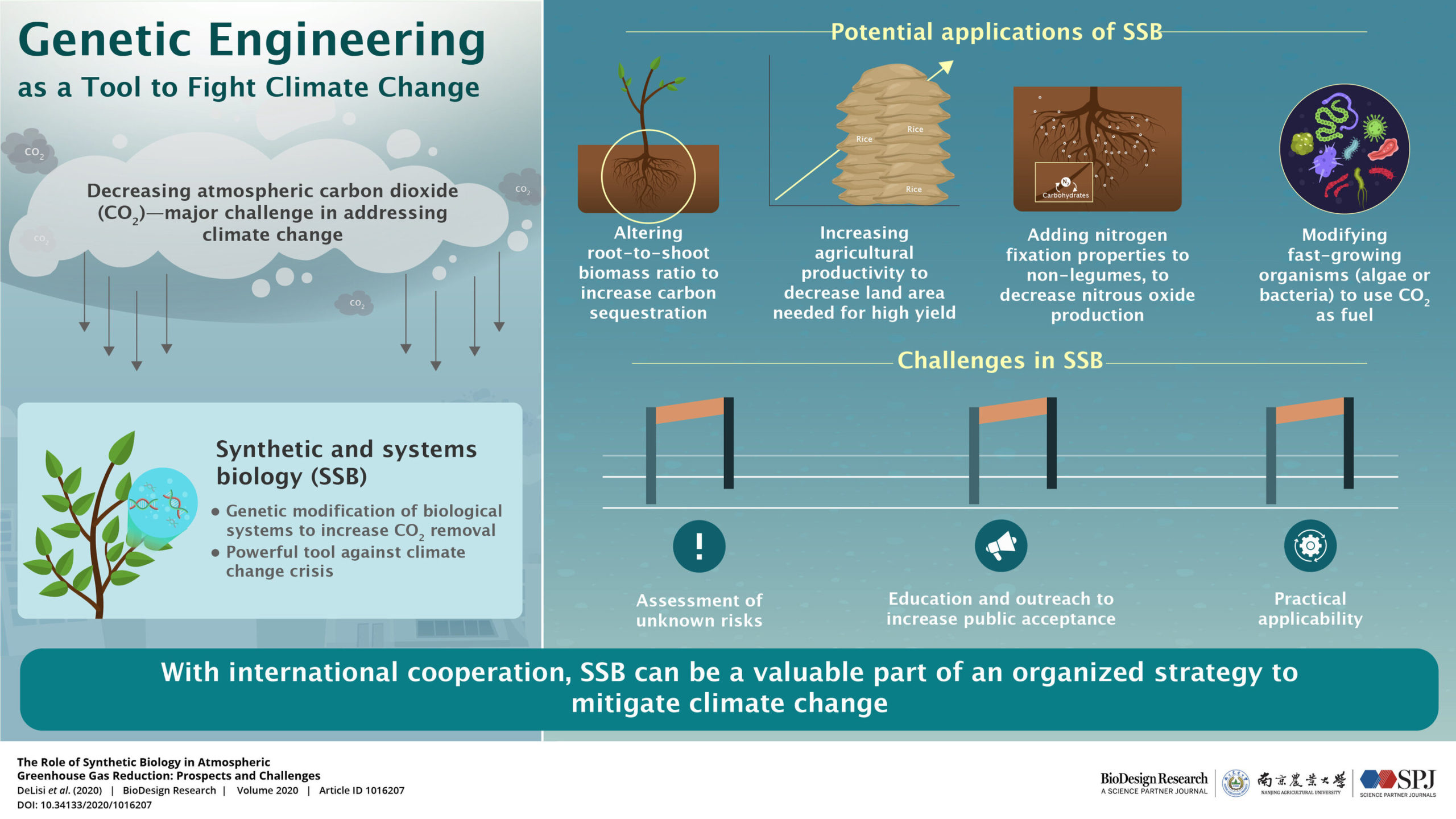 Climate change is a major global crisis. Despite international agreements to fight climate change, greenhouse gas emissions continue to increase and global temperatures continue to rise. The potential effects on our lives are drastic: recent wildfires in the US and Australia, floods due to heavier precipitation, and heavy losses of crops are all indicative of this. But simply reducing the production of greenhouse gases, although crucial, is not enough. The CO2 that we’ve released, and are continuing to release into the atmosphere, remains there indefinitely. Climate change will thus continue to worsen unless atmospheric carbon is removed. Therefore, finding cutting-edge solutions for the active removal of greenhouse gases is crucial.

With this in mind, a group of scientists from the US and Israel have proposed a CO2 removal strategy that utilizes the powerful methods of synthetic and systems biology (SSB). The further development and deployment of SSB could enable the modification of plants to remove CO2 from the atmosphere irreversibly.

At a symposium held in Boston, the scientists discussed their ideas for mitigating the negative effects of climate change, with their findings published in BioDesign Research. Professor Charles DeLisi of Boston University, lead author of this paper, explains this concept using an interesting analogy, “Engineers learned long ago how to design and manufacture circuits to perform desired tasks. In the past two decades, biomedical engineers have begun to learn to design and manipulate the circuitry that enables cells to carry out biological processes with enhanced functions: in this case, CO2 removal.”

In this paper, the scientists began by summarizing a few ways in which these bioengineered, sustainable plant phenotypes can be developed. They suggested targeting and modifying genes that, for instance, change the root-to-shoot ratio to increase the amount of CO2 trapped in the soil. Additionally, genetically altering leaf properties could potentially increase crop productivity: for example, a plant can be modified to process more energy via photosynthesis without needing as much sunlight, or they could become more drought-resistant via leaves that don’t allow as much water to evaporate. Improving crop productivity would increase sustainability because fewer crop failures and more yield means less land is needed to grow enough food.

Other interesting genetic modifications of plants involve giving them the ability to fix nitrogen (converting nitrogen gas into forms that plants can use for growth). Currently, only legumes (beans) with nitrogen-fixing bacteria can do this, but if the ability can be added to major staple crops like wheat, we could draw large amounts of the nitrous oxide, a major greenhouse gas, out of the atmosphere. Besides plants, various bacteria could also be engineered to use CO2 as their carbon source instead of sugars, potentially becoming a space-saving way of pulling CO2 from the atmosphere.

While these methods are promising, Prof DeLisi and his colleagues acknowledge that their proposals are a step into the unknown. “

Perturbations of the carbon cycle on a global scale will be profound and irreversible in their consequences. Developing a national agenda without a serious and open analysis of risks and mitigation strategies would be a mistake both politically and ethically.”

In particular, the scientists warn that applications of SSB require us to think carefully about how to prepare for unintended consequences, who is liable in case of harm, and whether benefits are fairly distributed in society. Having strong answers for these issues will help to generate public acceptance.

Nevertheless, this novel strategy has numerous environmental and economic advantages, and thus, it is definitely worth serious consideration. “It is very important to explain that we could have a win-win climate change strategy using bioengineering to modify and design plants that remove carbon, while being high yield to mitigate climate-related food shortages and stimulate the economy,” concludes Prof DeLisi.