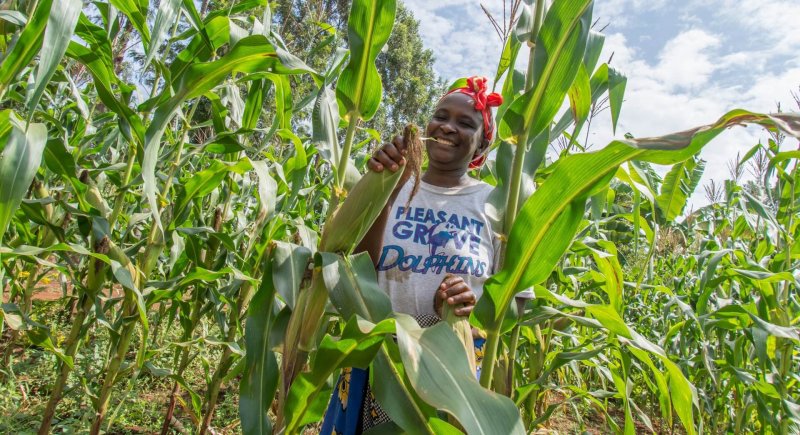 Kenya has taken a major step toward increasing its food and animal feed production, while reducing pesticide use, by planting genetically modified (GM) insect-resistant maize in open fields.

With this latest development, Kenyan farmers are now closer to growing GM (Bt) maize on their farms. The Bt maize planted earlier in western Kenya is already showing resistance to the destructive stem borer and fall armyworm pests, which will help farmers reduce their use of pesticide sprays.

Bt maize is expected to be commercialized by 2022 if it is approved by Kenya’s relevant government agencies, said Prof. Dorrington Ogoyi, chief executive officer of the country’s National Biosafety Authority.

In keeping with the National Performance Trial (NPT) phase of research, Bt maize has been planted in six sites that represent target agro-ecologies for candidate Bt maize hybrids. The sites are located in the Kenya Agricultural and Livestock Research Organization (KALRO) centers of Alupe, Embu, Kakamega, Kandara (formerly Thika), Kibos and Mwea.

NPTs are trials designed to test new plant varieties for performance, including agronomic potential and adaptability in the target region, compared to varieties currently or commonly on the market, James Karanja, principal investigator of the TELA maize project, told the Alliance.

“They are a requirement by the Seed and Plant Varieties Act for any variety that is to be released for cultivation/marketing in Kenya to ensure only improved but high-yielding varieties that are superior to the commercial ones are introduced into the market,’’ Karanja said.

NPTs are carried out by the Kenya Plant Health Inspectorate Service (KEPHIS) in collaboration with other stakeholders. After this season’s harvest, which is expected to occur in mid-2021, KEPHIS will prepare a report that analyzes data collected during the trials for review by the NPT committee (NPTC).

“If the varieties meet the release criteria, the committee will recommend them to the National Variety Release Committee (NVRC), chaired by the Minister of Agriculture, for approval,” Karanja explained. This opens the door to allowing plant breeders and seed companies to multiply and sell seeds for the new varieties.

The Bt maize research is part of Kenya’s 10-year Agricultural Sector Transformation and Growth Strategy that is intended build on previously strategies to transform the country’s agricultural sector by 2029 and make it a regional powerhouse.  It emphasizes integrating modern farming techniques into Kenya’s agricultural sector to improve productivity. The strategy includes lifting Kenya’s ban on GM crops.

It also involves operationalizing the e-voucher systems for access to agricultural inputs for one million smallholder farmers, and carrying out farmer registration and digitization of agricultural data for decision-making and commercialization of GM Bt cotton, according to the Agriculture ministry.

Farmers in the Western regions are already seeing some improvements in comparison to other varieties they have been planting. Francis Opailo, a cotton farmer in Busia County, said that ‘”other varieties we used to grow would yield 10 bolls or 12, but today, we have counted some Bt cotton trees yielding up to 70 bolls.”

Francis Okuku, another cotton farmer in Busia, said he expects to harvest better yields from his Bt cotton by the end of November, given the initial performance of the crop.

Ogoyi said the government has identified 1,000 farmers to plant the country’s first GM cotton seeds in the country’s eastern region during the October-November short rain season.

The process was slowed down by the National Environment Management Authority’s (NEMA) request for an environment impact assessment, which was submitted in September.

The maize varieties now being tested are the GM versions of conventional maize hybrids released under the Water Efficient Maize for Africa (WEMA) project. The conventional hybrids have already released, and some are on the market in Kenya.

The Bt varieties have been planted alongside the conventional hybrids, as well as other popular commercial varieties, for comparison.

‘‘To qualify for release, the Bt hybrids have to perform better in key attributes, such as stem borer resistance, and meet the desired maturities in the target agro-ecologies,’’ Karanja said.

Meanwhile, the cost of animal feed has shot up in East Africa. The Association of Kenya Feeds Manufacturers raising concerns at the increased price of maize germ mainly used to manufacture animal feeds. This has led to higher consumer costs for essential proteins such as eggs.

Karanja said farmers often debate whether to grow other crops when maize is hit by a new plant disease, pest pandemic or other limiting factor, such as maize lethal necrosis, fall armyworm, drought or aflatoxin.

However, given the ubiquity of maize in multiple, diverse livelihood systems across Kenya and elsewhere in sub-Saharan Africa, national and international crop science institutions have responded with new research to improve existing maize varieties, as well as breed superior varieties with the ability to withstand persistent challenges, Karanja said.