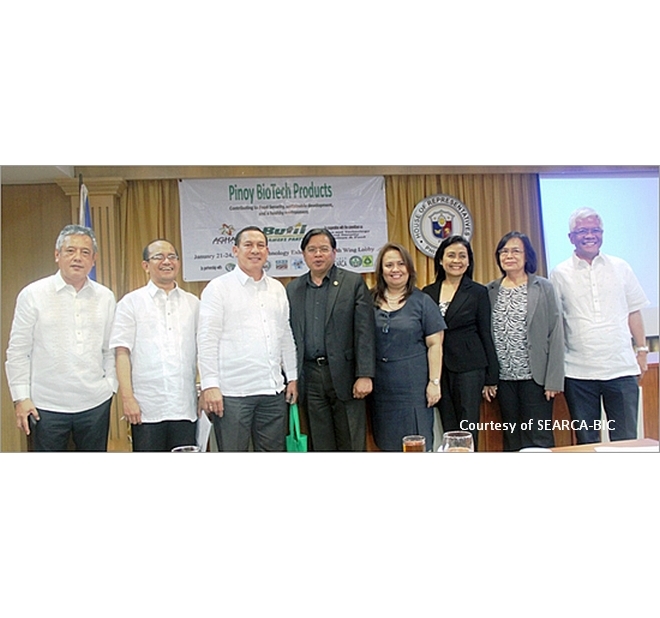 Philippine policymakers including House of Representative Speaker Feliciano Belmonte, Jr. and Chair of the House Committee on Science and Technology Congressman Julio Ledesma IV recognized the potentials of biotechnology in improving the country’s food security during a four-day biotech exhibit and seminars co-organized by SEARCA in Congress on January 21-24, 2013.

Speaker Belmonte said in his address for the opening of the biotech exhibits that despite the emergence of challenges in agriculture and the environment, “parallel advances in science are being made which carry the hope of possible solutions.” He acknowledged the need for more biotech education on the safety of biotech crops adoption as well as the review of agricultural policies on land use, and emphasized the development of low-cost and appropriate technologies for farmers.

Congressman Ledesma shared in his message during the opening that he has seen the potentials of biotech crops in as early as the 1980s after seeing a biotech field trial in the United States as part of an agri-business program he enrolled in. He marveled at the fact that biotechnology has already been present for a long time in the US.
The outreach activity involved biotech seminars for media practitioners and policymakers, with Dr. Evelyn Mae Mendoza of the National Academy of Science and Technology (NAST), Dr. Reynaldo Ebora of the University of the Philippines Los Baños – National Institute of Molecular Biology and Biotechnology (UPLB-BIOTECH), Dr. Nina Gloriani of the College of Public Health-UP Manila, and successful biotech corn farmer from Pangasinan Ms. Rosalie Ellasus as among the resource persons. The seminars served as an opportunity for the policymakers, media, and other Congress constituents to clarify issues and concerns on biotechnology, particularly genetically modified crops.

SEARCA Director Dr. Gil C. Saguiguit, Jr. said in his speech during the biotech seminar for policymakers that the activity is the Center’s effort in widening its reach to non-traditional sectors who should be equally concerned about the advent of biotech. It aimed to promote local biotech efforts in Congress and raise awareness among policymakers and key constituents on the technology’s benefits and potentials for the country.

In the seminars, the scientists explained the importance of continuing public biotech researches such as the research and field trials on the insect resistant Bt eggplant. UPLB-BIOTECH Director Dr. Ebora expressed that these were government-funded projects, hence, the technology’s benefit should go back to the Filipino people. The upcoming biotech crops and technologies were also shown by studies to hold great potentials in bringing socio-economic benefits to its adopters.

Dr. Saguiguit also pointed out biotechnology’s link to food security. “It allows us to increase production that would be a solution. If not, it will contribute to food security,” he said. He also said, “Being rational individuals, we should go for scientific evidence, rather than anecdotal basis for choosing between the pros and cons of biotech.”

Cong. George Arnaiz of Negros Oriental, Cong. Sandra Sema of Maguindanao and Cotabato City, policymakers’ chiefs of staff, and legislative staff from the Committees on Science and Technology, Agriculture and Food, and the Special Committee on Food Security of the House of Representatives participated in the seminar. Both legislators have expressed that they were enlightened and are now open to the technology, recognizing the science-based benefits and potentials that biotechnology could bring to local agriculture.

The activity was co-organized by SEARCA; the Offices of Congressman Angelo B. Palmones of AGHAM Party-list and Congressman Agapito H. Guanlao of Butil Party-list; the House Committees on Science and Technology and Agriculture and Food and the Special Committee on Food Security; University of the Philippines Los Baños – National Institute of Molecular Biology and Biotechnology (UPLB-BIOTECH); UPLB – Crop Science Cluster – Institute of Plant Breeding (UPLB-CSC-IPB); National Academy of Science and Technology (NAST); International Service for the Acquisition of Agri-biotech Applications (ISAAA); Philippine Science Journalists Association, Inc. (PSciJourn); Program for Biosafety Systems Philippines (PBS Philippines); and Department of Agriculture (DA).
(Jenny A. Panopio and Sophia M. Mercado)

Published in News and Events and Programs