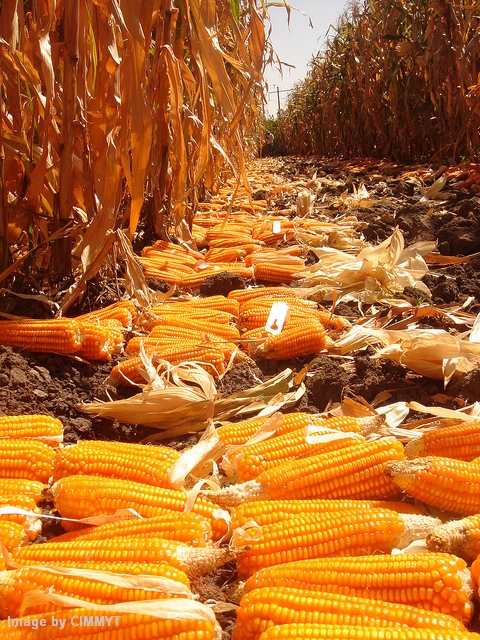 Two new maize varieties that contain high levels of beta-carotene – the precursor of vitamin A – have been released in Nigeria, offering hope against the menace of vitamin A deficiency plaguing millions in the country. Vitamin A deficiency leads to blindness and, in some cases, even death among vulnerable groups particularly children, pregnant women, and mothers.

Beta-carotene is converted by the body into vitamin A when the maize is consumed, thereby boosting the immune system.

The hybrids, which are the first generation provitamin A-rich maize, were released on 4 July 2012 by Nigeria’s National Variety Release Committee as ‘Ife maizehyb 3’ and ‘Ife maizehyb 4’. They are recognized as IITA hybrids A0905-28 and A0905-32, respectively.

“The hybrids are a product of nearly a decade of targeted breeding for enhanced levels of provitamin A,” says Dr. Abebe Menkir, maize breeder with the International Institute of Tropical Agriculture (IITA), who led the project that developed the new maize hybrids.

Menkir added that apart from being nutritious, the maize hybrids are also high yielding, producing 6 to 9 tons of the crop per hectare. In Nigeria, local maize varieties commonly grown by farmers produce only about 2 tons per hectare.

The new maize varieties are well suited to the tropical lowlands typical of many West African countries and are expected to spread beyond Nigeria’s borders.

JULY 27, 2012 BY CONSORTIUM News from the CGIAR Consortium