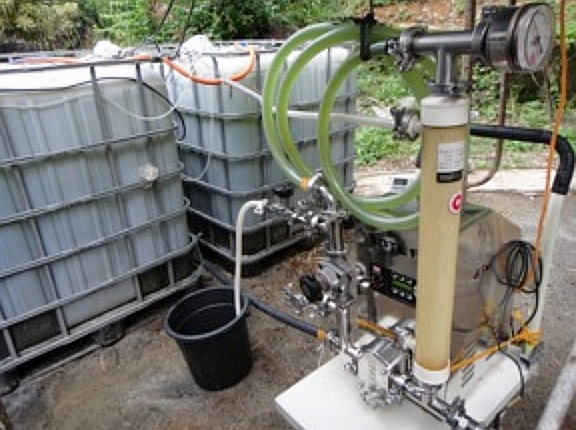 From 1978 to 1996, the U.S. Department of Energy’s Office of Fuels Development funded a program to develop renewable transportation fuels from algae. The main focus of the program, known as the Aquatic Species Program (or ASP)2 was the production of biodiesel from high lipid – content algae grown in ponds, utilizing waste CO2 from coal fired power plants. Over the almost two decades of this program, tremendous advances were made in the science of manipulating the metabolism of algae and the engineering of microalgae algae production systems.

Using the information derived from the years of research under the ASP and through the cooperation of equipment manufacturers through SECURA’s network of Biotechnology Systems suppliers, a facility to undertake the productivity of local microalgae strains was established in the existing R&D facility of Secura International Corp. in Bgy. Tagpako, Gingoog City, Misamis Oriental. The main objective is to determine the productivity rate of local microalgae strains. Initial results from the pilot plant size of 4 cubic meters photobioreactors showed very encouraging data.

The process and eng ineering design for a small scale commercial production , 32 ponds of 16 cubic meters each are now in operation at Bgy. Tagpako, Gingoog City, Misamis Oriental.

Biofixation of CO2 by Microalgae

The Philippines lead the world in Marine Biodiversity placing in our hands the vast resources ready to be tapped for our own use. Microalgae are single cell plants, they needed sunlight and CO2 for photosynthesis, just like a tree does. In this process they produce carbohydrate,  proteins and lipids (oil). The oil makes their bodies float in the water in order to get maximum sunlight. Providing these single cell plants an environment where they get abundant nutrients , they will proliferate massively and will continuously provide us all the biomass we need to generate power. By selecting the microalgae strain that produces more oil per biomass weight, then we have a rich renewable source of biofuel feedstock. Such microalgae strain are growing even in our own backyard, and with nutrients coming from a run- off irrigation, sunlight and CO2 in the air they can colonize any body of water including lakes and dams.

Our Algae strain improvement laboratory allows us to tailor – fit every application . The algae biomass yield is boosted by dissolving CO2 in the algae pond and optimizing the maximum vertical circulation rate of each microalgae cell capturing photons from the sunlight maximizing its growth.

A ton of algae biomass sequesters 1.8 metric tons of CO2 dissolved in water. A hectare of algae pond lined with white HDPE liners with a water depth of one (1) meter will produce from 511 metric tons biocoal and 475,000 liters of synthetic diesel up to 1,533 metric tons of biocoal and 1,426,000 liters of synthetic diesel per year when artificial lights from light emitting diodes will be used. Harvesting will be done by an advance Dissolved Air Flotation (DAF) system and a microfiltration based concentration step using vibratory shear enhanced processing (VSEP®) patented technology.

Conversion of Algae Biomass to Biocoal by Hydrothermal Carbonization (HTC)

The carbonization of biomass residuals to char has strong potential to become an environmentally sound conversion process for the production of a wide variety of products. In addition to its traditional use for the production of charcoal and other energy vectors, pyrolysis can produce products for environmental, catalytic, electronic and agricultural applications. As an alternative to dry pyrolysis, the wet pyrolysis process, also known as hydrothermal carbonization, opens up the field of potential feedstocks for char production to a range of nontraditional renewable and plentiful wet agricultural residues and municipal wastes. Its chemistry offers huge potential to influence product characteristics on demand, and produce designer carbon materials. Future uses of these hydrochars (biocoal) may range from innovative materials to soil amelioration, nutrient conservation via intelligent waste stream management and the increase of carbon stock in degraded soils.  In Algae biomass conversion to biocoal, the by – products are algae oil, filtrate and CO2 gas. The algae biocoal has a heating value of more than 13,577 Btu/lb, similar to anthracite coal heating value.

The origin of our technology, ‘Catalytic P D (Katalytische Drucklose Veroelung in German or, “KDV”), traces back hundreds of millions of years. KDV technology mimics nature’s own method of converting organic matter into crude oil.

It took the earth’s oceans billion years with low temperatures of about 20°C and very low concentrations of aluminium – based catalysts convert dead biomass into crude oil. On the other hand, the KDV with, its  average 280°C process temperature, a 20% concentration of a highly active, fully crystallized aluminium silicate – based catalyst and increased motion generated by the facilities’ turbines, achieves the same result in just 3 minutes.

The most attractive feature of the KDV process is the fact that it does not require vegetable oil or other feedstocks, which could otherwise be consumed as food, but instead utilizes waste materials or biomass, like the husks or straw of wheat, barley and rice plants, press cake from vegetable oil production, wood chips, saw dust,  sugarcane bagasse, Napier grass, water lilies, coconut husks, EFB, Jatropha, Coconut Husks or coconut fronds, algae biomass , waste water treatment sludge and other otherwise unusable plant matter.

This versatility, which no other technology can offer, means that it is a simple matter to secure stable high- volume feedstock supply in almost any given region, and in close proximity to the plants —and this allows for an ideal balancing of machine capacit y and the seasonal fluctuation of particular feedstocks.

While the KDV process can convert virtually any kind of biomass or fossil hydrocarbons, it is often necessary to adjust the procedure and the feedstock mix to achieve the optimal output of ultra – low  sulphur diesel ULSD.

The core process of the KDV system, generating energy by the action of a turbine and the process of pressure- less depolymerization is patented and proprietary to this technology.

The patented KDV turbine, on the other hand, generate s energy by thermodynamic means inside the fluid medium by virtue of minuscule temperature differences. No carbon build – up occurs. The process is extremely energy efficient, and generates no toxic substances such as dioxin and furans.

One of the strongest  advantages of the KDV technology is its extremely low impact on the environment.

The products coming out from the Algae Biomass plants are biocoal (anthracite coal quality) ,synthetic natural gas  and synthetic diesel can be used as a renewable biofuel feedstock for Power Generation . The fuel demand of a combine biocoal fueled power plant and diesel fired “peaking” power plant can be supplied by the Algae biomass. The CO2 gas present in the Power Plant Exhaust af ter will be collected via a flue gas purification system  will enable the CO2 gas to be used in the algae ponds.

The SNG can be used to provide renewable biofuel for Gas fired Power plants or to a base- load Fuel Cell Power Plant.

The Clean Development Mechanism  (CDM) is one of the “flexibility” mechanisms  defined in the Kyoto Protocol (IPCC, 2007)4. It is defined in Article 12 of the Protocol, and is intended to meet two objectives: (1) to assist parties not included in Annex I in achieving  sustainable development and in contributing to the ultimate objective of the United Nations Framework Convention on Climate Change (UNFCCC), which is to prevent dangerous climate change ; and (2) to assist parties included in Annex I in achieving compliance with their quantified emission limitation and reduction commitments (greenhouse gas (GHG) emission caps). “Annex I” parties are those countries that are listed in Annex I of the treaty, and are the industrialized countries. Non- Annex I parties are developing countries. Objective (2) is achieved by allowing the Annex I countries to meet part of their caps using “Certified Emission Reductions” from CDM emission reduction projects in developing countries (Carbon Trust, 2009, p.  14)5. This is subject to oversight to ensure that these emi ssion reductions are real and “additional.” The CDM is supervised by the CDM Executive Board (CDM EB) and is under the guidance of the Conference of the Parties (COP/MOP) of the United Nations Framework Convention on Climate Change (UNFCCC).

The CDM allows industrialized countries to invest in emission reductions wherever it is cheapest globally (Grubb, 2003, p. 159)6. Between 2001, which was the first year CDM projects could be registered and by 2012, the end of the Kyoto commitment period, the CDM is expected to produce some 1.5 billion tons of carbon dioxide equivalent (CO2e) in emission reductions7. Most of these reductions are through renewable energy, energy efficiency, and fuel switching (World Bank, 2010, p. 262). However, a number of weaknesses of the CDM have been identified (World Bank, 2010, p. 265 – 267). Several of these issues are addressed by a new modality, the Program of Activities (PoA)  that moves away from accrediting single projects but bundles all projects of one type of activity and accredits them together.

We have identified funders for these projects and we are looking for serious Offtakers that will purchase the products we will produce from your CO2 gas wastes.

Published in Archive and News and Events