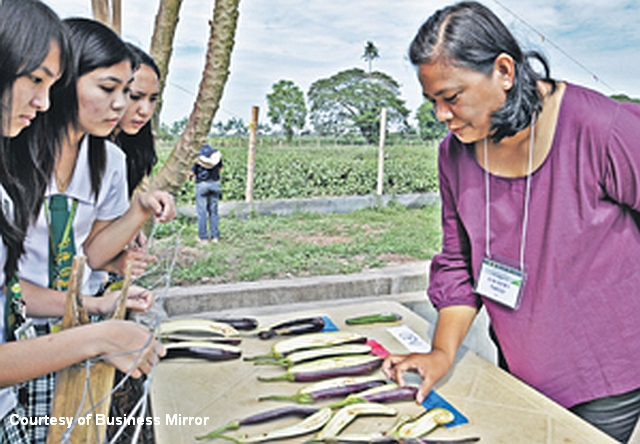 UNIVERSITY OF SOUTHERN MINDANAO, North Cotabato—The fourth multilocation field testing of the Bacillus thuringiensis (Bt) eggplant at the campus demonstration farm here in Kabacan, North Cotabato, is set to wrap up on July 10.

On Friday biotechnology experts, local agriculture officers and students witnessed the 15th harvesting of the genetically modified (GM) Bt eggplant, showing similar high consistency as in three other tests elsewhere in the country in warding off attacks by the main damaging pest, the fruit-and-shoot borer (FSB).

The field test inside the University of Southern Mindanao (USM) campus would conduct three more harvests until July 10 to wrap up the first round of transplanting of the hybrid-eggplant variety, said Dr. Concepcion Bravo, the co-project leader and the former chairman of the USM Department of Entomology.

Dr. Lourdes D. Taylo, the Bt eggplant-test leader and entomologist from the Institute of Plant Breeding (IPB) of the University of the Philippines-Los Baños, said all the harvested eggplants in the USM test showed no borers.

She said this would indicate high optimism for eggplant farmers to move away from high dependency on pesticides to combat the borers. She said that farmers often spend 25 percent of their total production cost to chemical pesticides.

Taylo told the group of visitors outside the 6,000-square-meter farm that field personnel were instructed to uproot the hybrid eggplants upon termination of the field test, “and to chop all plant parts, including the harvest fruits, boil them and bury them” underground that was already dug for the purpose.

She said that the “open pollination variety [OPV],” consisting of the other high-yielding eggplant varieties, that were planted alongside the hydrid variety, would be ratooned, or cut at the stem, to demonstrate that they would still grow shoots.

The USM field test planted the hybrid variety in four lines and the OPV in three lines. Around them were ordinary, or native, eggplant variety, planted to serve as buffer, or pollen catch, to filter whatever pollen may be carried by bees, the main pollinator.

A chicken-wire fence surrounded the farm to prevent both persons and animals to damage or carry away the tested plants that may result in “out-crossing” of the hybrid with other eggplants.

Bravo said the project team at the USM has also observed the 200-meter additional buffer from the fence which should not be planted to eggplant.

Bravo said the field test would allow two months after July 10 to determine if there would be new growths after uprooting the hybrid, afterwhich “we would plant another new batch of hybrid and conduct similar tests on 18 harvests.”

The second round would try to determine the consistency of the result of the first round, which was transplanted on March 30 this year. The first harvest was done on May 10, and harvesting would be conducted every other four days.

Taylo said the USM results were consistent with the same results in the three other field tests in Santa Maria in Bulacan, Bicol University in Camarines Sur and in Pangasinan.

Two more planned field tests were awaiting approval from the municipal government of Santa Barbara, Iloilo, and the barangay council of Baybay, Leyte, where the IPB would hold its field test inside Visayas State University.

A Powerpoint presentation by retired UPLB entomologist Dr. Emiliana Bernardo showed that the Bt eggplant has “confirmed the efficacy against FSB [fruit-and-shoot borer] and safety to nontarget organisms [as] observed in the earlier tests.”

Bravo sent one personnel to catch plant-friendly flying insects and a worm “to show that there are still the same insects that you see in any other ordinary farms planted with eggplants.”

She appealed to opposers of the field tests “to please allow us to demonstrate the promise that Bt eggplant would bring to farmers.”

“I hope we should set aside first the allegations and allow us to proceed with our tests,” she said.

USM President Dr. Jesus Antonio Derije confirmed that the environment-advocacy group Greenpeace had written him this year to allow them to uproot the plants. He said the plan did not prosper.