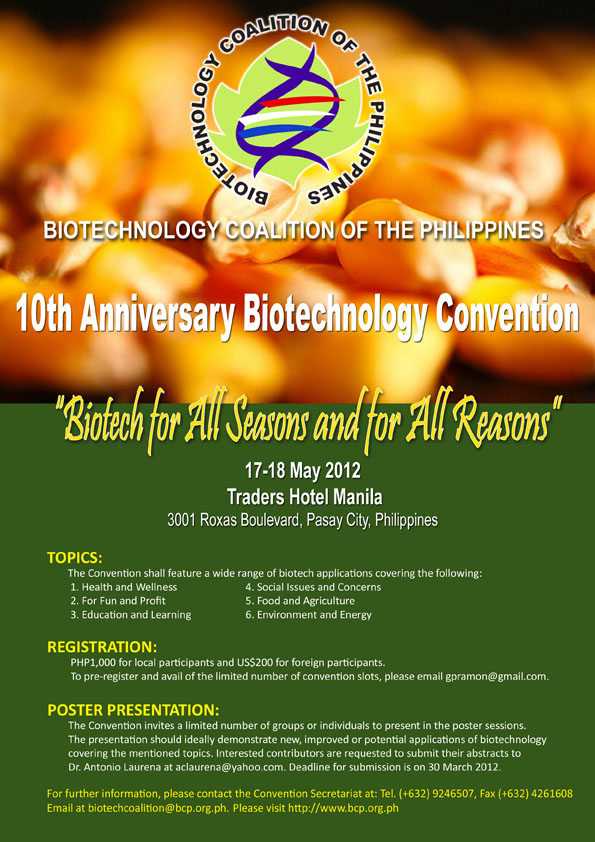 Singapore: The Biotechnology Coalition of the Philippines (BCP) has reaffirmed its commitment to push for the adoption of biotech crops that are healthy, risk-free and friendly to the environment. The BCP issued this declaration as it celebrated its 10th year by holding a convention on May 17-18 at the Traders Hotel in Manila. BCP has been pushing forward the development of local (Pinoy) genetically-modified organisms (GMOs) such as papaya with ring-spot virus resistance and longer shelf life, Bacillus thuringinesis (Bt) eggplant resistant to fruit-and-shoot borers, and golden rice which addresses Vitamin A deficiency among hundreds of thousands of nursing mothers and children.

The paper of DA Usec Segfredo Serrano on the government’s biotechnology program was read by Dr Candida Adalla, head of the Biotechnology Program Office of the Department of Agriculture (DA-BPO).
BCP president Dr Nina Gloriani also addressed the participants about the importance of biotechnology and how it would eventually buttress the country’s food security in spite of criticisms hurled by parties virulently opposed to GM crops and agricultural biotechnology in general.

There were sessions on Genetic counselling in the era of personalized medicine, China’s biopharmaceutical development, and biotech for fun and profit. A session was also devoted to crop biotechnology: sustainability and climate which was lectured by Professor Peter J Davies, who is a Jefferson Science Fellow of the Office of Agriculture and Biotechnology of the US Department of Agriculture.